What did you have for dinner?

teamfat - I pan fried a steak I cut from a standing rib roast Saturday night and it was fantastic. There is nothing like a good steak every once in a while. Happy Birthday

An old standard, comfort food when you're stuck inside - Tuna Casserole with French's fried onions throughout and on top.

That tuna casserole looks like a good contender in the April "Inside The Box" challenge.

We're so bored here, we decided to "go out to dinner." We dressed up in our best clothes and I grilled Top sirloin steaks on a grate in the fireplace. Also Caesar Salad, Roasted Russets, and fresh green beans with bacon, onions, and diced tomato. Dessert was crepes with my home made apple pie filling and Calvados.

I made grilled cheese BLT's with avocado. Tater tots and a dill pickle on the side - oh man was it yummy!!!

It was 64 and sunny today with no wind. I defrosted a dozen sausages we grilled (three different varieties) and sauteed some peppers and onions and heated some garlic dill sauerkraut. Oh so good to eat outside.
U

During this coronavirus time I’ve decided to try cooking some international cuisine. This was my first Rigatoni Alla Gricia. Also made this Potenza Sweet Lasagna (I did not enjoy the almonds in it at all and will pass on this recipe in the future)

I made me a pot-o-greens today - collards, turnip and kale. Started with bacon in the pot then onion and carrot, added the greens and a couple pucks of goo - chicken and pork I think
(one was dark). I let those simmer then rest. I made some corn bread while reheating the greens and sauteed some ham steak. Mmmmm Mmmmm Good. I'm following that up with some brilliant peach/apricot/honey moonshine a good friend made. Cheers Y'all . . .

Made Lasagna al forno, using a Bechamel topped with some aged Parmesan in place of cottage cheese or ricotta. Spent about 2 hours simmering the Ragu. Figured it would be a good meal or two for me and the wife, and we could have some left overs for lunch today. It seems however, I didn't make enough...I had three of my neighbors swing by (the curse of cooking with the windows open). We decided to dine al fresco in the back yard.... But hey, with a bottle of wine in the mix, we all went to bed happy and full.

I made some burgers (spicy ones) and decided that I needed some fresh bread. Since I have no oven, I used a dry frying pan an made something resembling a Turkish pide.
Came out well and I'll definitely will make it more often as it is fairly quick (and tasty)

Just a couple that I didn't get to post in the "out of the freezer" challenge.
I call it: Creative with fish fingers"

And fish finger green curry (with yoghurt instead of coconut cream)

Taking a cue from Butzy and his fish dishes, I found some filets in the freezer and did a pan seared Salmon over a bed of white bean and lobster ragu.

I felt like cooking something meatless today, so I went to the farmer's market and found some tasty-looking summer squashes. I bought a two-pound squash, still rather small by this variety's standards. The classic way of cooking summer squashes around here is to peel them, grate them, then sauté some chopped onion in butter or lard, add the squash together with some sweet paprika, crushed caraway, salt and pepper, and let it cook covered until tender, about 5 to 10 minutes. Then some sour cream beaten with a little flour is added, the whole thing cooked for a couple of minutes, and in the last minute of cooking, some chopped dill is added.

You could serve it with just plain boiled potatoes, but I definitely prefer the traditional potato fritters. For these, potatoes are grated raw and then it needs three things in truly liberal amounts - grated onion, grated garlic, freshly-ground black pepper. A tablespoon or two of dried herbs - marjoram is the classic choice, but spearmint or savoury wouldn't be out of place at all. I must be seasoned very well with salt. Finally, add just enough flour to bind it into a sort of a batter. Heat an inch of lard or oil in a frying pan and fry the batter by tablespoons that you immediately flatten with a spoon. The fritters should be golden-brown.

If you think you need some protein, a fried egg or two should be enough. But in that case I would probably forgo the fritters and serve just boiled potatoes. Or you could serve it with a slice of meatloaf, flavoured perhaps with some chopped onion, garlic, parsley, crushed caraway and black pepper. You might even hide some hard-boiled eggs inside the meatloaf and bake it with those eggs, so that when sliced, there is a slice of the egg in the middle.

Pasta with sardines and wild fennel

This is a Sicilian classic that possibly goes back to medieval times, as the Arabic influence is pretty obvious. I made some busiati and toasted some breadcrumbs, then made the pasta sauce: sliced onion, chopped salted anchovies, saffron, raisins, pine nuts, fresh sardines and wild fennel. Topped with the breadcrumbs. The busiati:

This is a Sicilian classic that possibly goes back to medieval times, as the Arabic influence is pretty obvious. I made some busiati and toasted some breadcrumbs, then made the pasta sauce: sliced onion, chopped salted anchovies, saffron, raisins, pine nuts, fresh sardines and wild fennel. Topped with the breadcrumbs. The busiati:

Hope you made enough as I am coming for dinner

Salt and pepper duck breast, baby bok choy and stir fry in oyster sauce. Could have done better the crispy duck skin, did the cold pan start, should have ramped up the heat sooner. And why is this little bowl of corn starch slurry still on the counter and not in the stir fry?

The perils of cooking when you come home from work tired and worn out.

butzy said:
Hope you made enough as I am coming for dinner
Click to expand...

Haha, sure, you're welcome!

For Father's Day I took a grass fed tenderloin out of the freezer. It weighed 4.63 lbs. and after trimming and processing I ended up with 10oz. of waste (silver skin, etc) Normally I'd tie this in cheese cloth and drop it in a stock pot, but it's 90+ here so away it goes. I sliced 8 1-1/4" steaks, had a petit roast, 13 oz. of grind trim and 13 oz. of the ends tied together. The later two went into the freezer and the rest I sous vide to medium rare then finished on a very hot grill. The result was stellar and in truth I did them just North of medium rare to appease my family, but talk about tender - oh yeah!!!

I also made fresh garlic ciabatta, tortellini with garlic scape pesto, fresh steamed corn and the best Jus one could hope for. As usual this is the only picture I have - 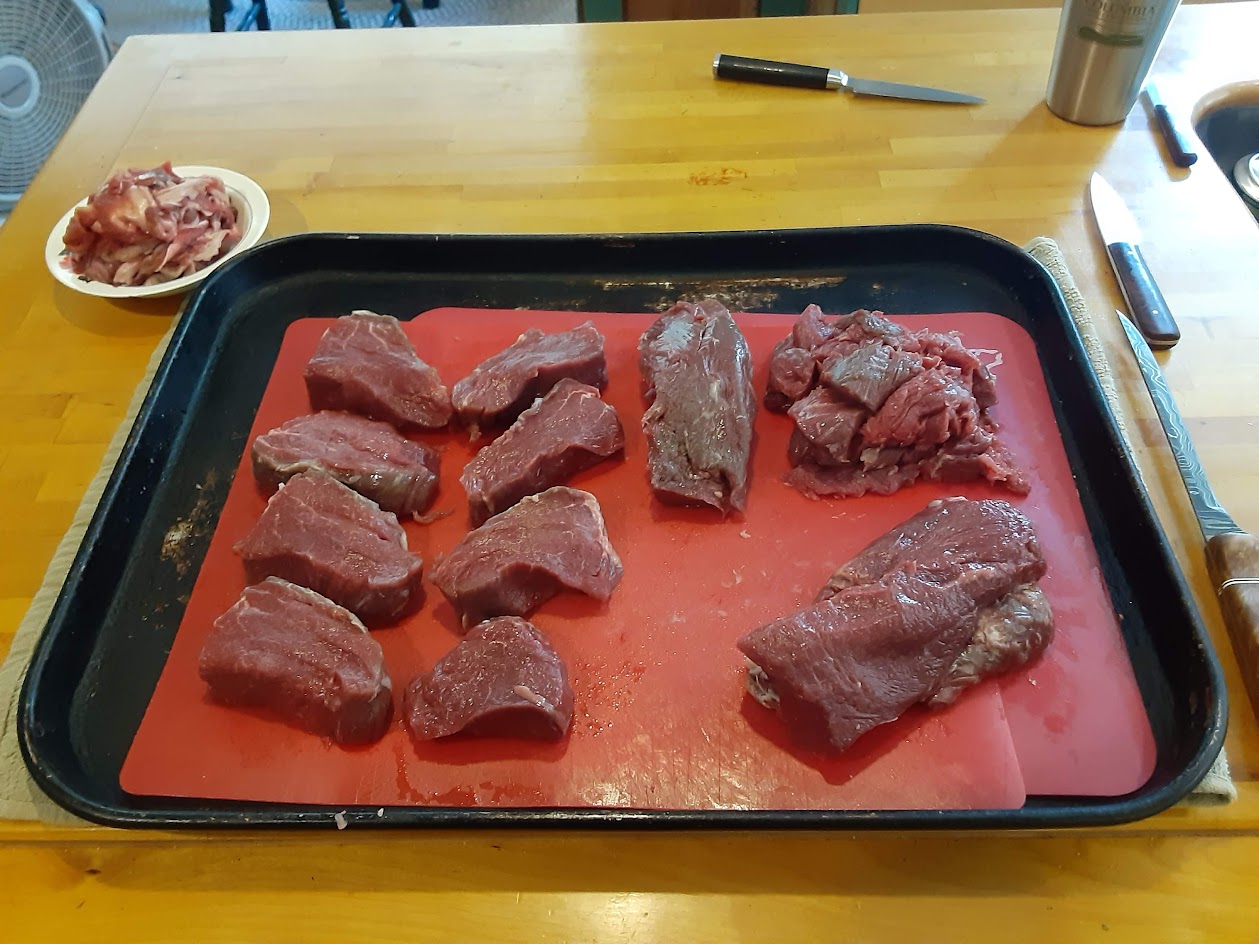 teamfat said:
And why is this little bowl of corn starch slurry still on the counter and not in the stir fry?
Click to expand...